Live Music @ the Pub - Brett Mitchell and the Giant Ghost

Friday May 6 10:00am – Thursday Apr 21, 2016 1:00am
New Holland Brewing Company
66 East 8th Street
Brett, a native of Midland and now residing in Alden, picked up the sticks in his early teens and fell in love. Drumming professionally by age 17 in a variety of bands, he began to pursue his interest in songwriting. To assist his writing, he taught himself guitar and by 2005 had recorded his debut album called {Stereo}, playing virtually all the instruments. One by one musicians approached him to support his live performance and the giant GHOST, Brett’s talented backing band, was formed. In 2007, Brett released his 2nd project, Small House, which includes the popular track, Born Too Late, and introduced his award winning Born Too Late video. His charming and charismatic personality along with heartfelt and sincere songwriting is not the only draw; the live show is literally riveting with Brett singing lead from the drums and/or acoustic guitar and often at the same time, including harmonica. Brett’s third album, Falling Apart At The

Seams, released in 2011 to rave reviews and he is in the studio recording project four at this time. Expect a rockin’ evening of originals and diverse covers that will move you to listen, watch and dance. 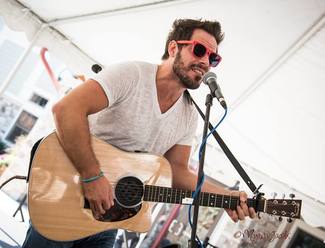