Join us to celebrate the opening of two exhibitions with drinks, light appetizers and conversations with the artists in the Padnos and Armstrong Galleries.

Not Lost, Just Looking: Artwork by Lucas Moneypenny
Padnos Gallery
July 22 – August 26
An alumni of Grand Valley State University, Lucas Moneypenny earned his Bachelors of Fine Arts in Painting. The pursuit of his work explores the relationship between the spiritual and the physical. Inspired by religious works of art he attempts to culturally place his beliefs in a contemporary conversation. In the act of painting his objective is to provoke curiosity and lasting engagement within others about aspects of the Divine, Religion, and this Life.

Speramus Meliora. Resurgent Cineribus. Photography by Steve Karsten
Armstrong Gallery
July 22 – August 26
“‘Speramus Meliora. Resurget Cineribus.’ We hope for better things. It will arise from the ashes.” The motto chosen for Detroit in 1805 after a disasterous fire, now seems strangely applicable today. Detroit has been the epicenter of many developments and devastations of America. This exhibit focuses on photos of Detroit from 2013-2015, as the city entered into, struggled to climb out, and eventually emerged from what remains to be the largest municipal bankruptcy filing (by debt) in U.S. history. Steve’s photos are not post-mortem, but rather an example of his belief in the redemption of Detroit. 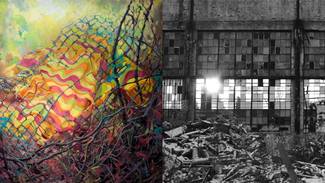