Dirk Quinn is the guitarist for a high energy funk/jazz band based out of Philadelphia that travels extensively throughout the US and Canada. Utilizing over a decade of steady performing, Quinn has developed a unique and progressive style – one that appeals to a wide variety of music listeners with fans ranging from the jam band hippies to the jazz snobs. Initially attracted to the guitar as a teenager after being introduced to classic rock giants such as Led Zeppelin and The Beatles, Quinn’s thirst for the unique and bizarre soon had him jamming along to the more radical and daring Mahavishnu Orchestra and the humorous, bass-laden noise of Primus.

Playing virtually non-stop with countless musical projects afforded him ample opportunity to hone his chops. It wouldn’t be long before the refining of his own artistic message coupled with a fresh, new outlook and a deeper musical/life philosophy opened up to him the world of jazz. Miles, Coltrane, Monk and Brubeck along with the more contemporary sounds of Bela Fleck, John Scofield, Ahmad Jamal and Jaco Pastorius began heavily influencing his musical direction. Liberated by the idea of free improvisation, he was finally able to realize and focus his musical vision.
The band’s infectious energy and musical interplay routinely attract listeners that are admittedly more accustomed to lyric-based music. With great melodic sensibilities, rhythmic experimentation and an accessible modern edge, the Dirk Quinn Band is jazz/funk improvisation at its most exciting! 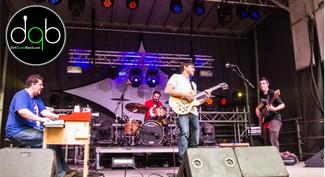