Tales from the Archives: The Legend of the Black Dutchman

A Holland, Michigan legend from the 1930s told of an African American child, a former slave who was rescued from the South during the Civil War and raised in a Dutch immigrant family in West Michigan. In time, this child learned the fundamentals of Calvinism and even the Dutch language, which he spoke to the amazement of many. How much of the legend of the Black Dutchman was true and how much was elaborated? Through exhaustive research, Historian and Hope College Graduate Professor, Michael Douma confirms much of the legend and shows that the truth of the matter was even more interesting than the story that had been passed down.

Free, virtual adult program. A Zoom link will be emailed the day before.
Registration required on Eventbrite
Donations appreciated 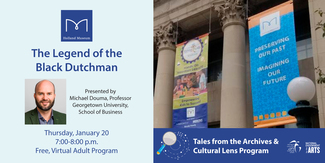