Join us at the Holland Museum for Warrior Lawyers: Defenders of Sacred Justice, a one-hour PBS documentary that is particularly timely and relevant given our country’s current reckoning with racial inequity and systemic racism. The film focuses on the stories of Michigan Native American Lawyers, Tribal Judges, and their colleagues who work with Native Nations, their citizens, and mainstream institutions to achieve Sacred Justice. These unseen role models strive daily to address and resolve unique and complicated historical, governmental, legal, judicial, and social welfare issues, which are most often rooted in discrimination, historical trauma, and cultural destruction. Come take a journey into past and present-day Indian Country to learn of untold stories that shine a light on Native Americans rising up to create a new path for today and for the next Seven Generations. A Q&A with the filmmaker, Audrey Geyer will follow the showing.

Audrey Geyer has been a video Director/Producer for over 20 years. Many of her programs have aired locally and nationally on PBS as well as been extensively distributed to the educational markets and through community screening events. She is the Founder and Executive Director of Visions, a non-profit 501© 3 independent video production organization, located in Metro Detroit. Visions mission is to produce social affairs documentaries that tell stories of Midwest communities and cultures underrepresented in the media. And that help foster empathy in our viewers, expand their knowledge as well as encourage dialogue, inclusiveness, and social change. Visions has produced two documentaries on contemporary Native American issues: ‘Our Fires Still Burn: The Native American Experience’ and ‘Warrior Lawyers: Defenders of Sacred Justice’. 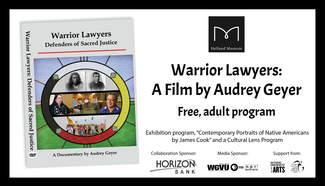