Jen has three albums under her belt with her latest release “So Long Pollyanna” named as album of the year by both John Bommarito (107.1 fm Ann Arbor, MI) and The Progressive Torch & Twang (88.9 fm East Lansing, MI). “So Long Pollyanna” was also nominated for two Jammie Awards (WYCE Grand Rapids, MI) including Best Song for “Sugar High”. Her previous release “Leaving Marshall St.” was nominated for a Detroit Music Award for BEST ACOUSTIC/FOLK ALBUM in 2007 and made it to number 9 on the independent roots music charts that year. Now, besides regionally touring and playing shows, Jen can also be found hosting the popular weekly open mic at Dagwood Tavern in Lansing, MI. She has been host of the thriving scene for nine years. 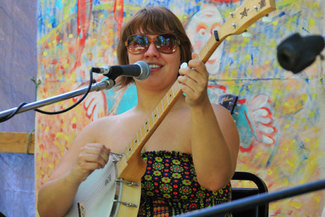