Hidden History: The Story of Latinx Immigration to Holland, Michigan

From the late 19th century to the present, immigration policy in the United States has been defined by exclusion: rules and laws designed to exclude certain people entirely, restrict others to particular roles in the U.S. economy, and maintain further limits on others. Despite this, many people have come to this country and thrived, building communities and enriching others.

In this talk, Sarah Yore-VanOosterhout, founder and managing attorney at Lighthouse Immigrant Advocates, and her partner, Aaron Yore-VanOosterhout, a historian of Mexico and researcher at Grand Valley State University’s Johnson Center for Philanthropy, will discuss the migration of people from Mexico and other Latin American countries into West Michigan, placing this movement in an international context. Through this talk and the broader LAUP exhibit, the Holland Museum is attempting to make visible a group of people that have long officially been rendered invisible, through the elevation instead of white people of European descent and the exclusion of all others.

Free, virtual adult program. A Zoom link will be emailed the day before.
Registration required on Eventbrite 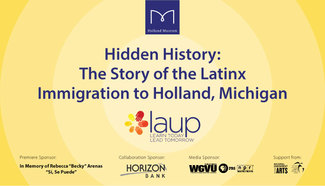